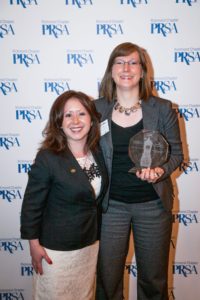 May 15, 2013, was the highlight of my professional career—the night I won a Virginia Public Relations Award.

Rewind to January of 2013. I was riding with two PRSA Richmond past presidents, Rachel Beanland, APR and Jenny Pedraza, APR, to northern Virginia on a Saturday to represent the chapter at the Mid-Atlantic District quick start meeting, a gathering of representatives from PRSA chapters across the district. During the long car ride up and back on I-95, often our conversation would include PRSA-related topics. At one point, Jenny and Rachel discussed the ideas they were batting around for Virginia Public Relations Award entries as the submission period was opening soon. After several minutes, they asked what I was going to submit.

I had never considered entering for a Virginia PR Award. My work as the sole PR person at a private, nonprofit history museum couldn’t possibly be worthy of an award, especially in a competition where the caliber of work submitted by professionals across the state was so high. I couldn’t even think of what I would enter!

Then Rachel said, “What about entering for your Food Truck Court campaign?” (Rachel attended several Food Truck Court events with her family so it meant a lot to me that she recognized the amount of strategy, planning and work that went into that initiative.)

At first I brushed it off. I had worked extremely hard on that campaign for the better part of 2012 and did have great successes in the end, but was the project really award-winning?

Jenny and Rachel asked me questions. What research did I do? What strategies did I use? What were my goals? How did I decide which media outlets to pitch? What were my social media tactics? How did the effort fit into the overall strategic plan of the organization? How did I engage staff and encourage them to participate? What was the feedback from the community?

I could answer every single question. After nearly an hour of talking about the Food Truck Court campaign, Jenny said, “Well, there’s your entry. Now you just need to type it up!”

With the support and encouragement of Rachel and Jenny (thanks, ladies!), I did type up my entry. I submitted it on Friday, March 1, 2013. And on Wednesday, May 15, 2013, at The Jefferson Hotel, the Food Truck Court campaign won the Virginia Public Relations Award 2013 Commonwealth Award of Excellence for extended events and observances. (For the record, I didn’t win top in the category by default either. My competition was strong, including submissions from PR agencies!)

Recognition for hard work is always nice, but I don’t think there is anything else I could have done professionally that could have boosted my confidence in my knowledge, skills and abilities as much as winning that award did.

I don’t write any of this to brag. I share this story because I genuinely hope that it inspires some communications professionals reading this—especially those sole practitioners at nonprofits—to seriously consider submitting an entry or two for the 2017 Virginia PR Awards.

I’m a realist: while we may not sit down and draft out a fully-formed project plan complete with every single detail related to research, planning, implementation and evaluation each time we work on a campaign for our company or client, we ARE practicing those steps each and every day.

If you think back to work you did last year and had to tell a few friends on a long car ride about what you accomplished, I bet you would have some great successes to share. Consider typing those up and submitting them for an award before the March 6 final deadline. You might just be joining me on Wednesday, May 10, at The Jefferson Hotel for one of the best days of your life.