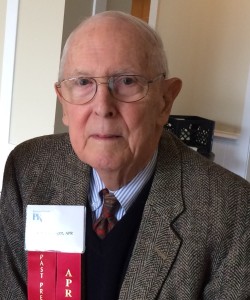 PRSA Richmond Past President, David M. Clinger, APR, passed away on Saturday, Aug. 13, 2016, at the age of 83. He served as president of the Old Dominion Chapter of PRSA in 1975 and, in 1998, he was honored with the prestigious Thomas Jefferson Award for Excellence in
Public Relations.

A longtime public relations practitioner, Clinger had a nearly 40-year career that included working as a reporter and copy editor for several newspapers, including the Richmond Times-Dispatch and the Free Lance Star in Fredericksburg, and then working for 25 years with Reynolds Metals. At Reynolds, he served as a regional public relations manager in Houston and Chicago before becoming director of corporate and financial communications at the company’s headquarters in Richmond. When he left Reynolds, he helped to create The Public Relations Council and served as managing partner of the PR firm.

Clinger was one of the first Richmonders to receive the accreditation in public relations (APR) designation. In addition to his work in the PR field, he co-authored the annually-updated “Insiders’ Guide to Greater Richmond” for five years. Also, he wrote “The Ghosts and Glories of Monroe Park: A Sesquicentennial History.” A graduate of Washington & Lee University, he volunteered with several nonprofit organizations in the Richmond area and was a member of St. James Episcopal Church.