Earlier this month, PR professionals from around the country descended on New York City for this year’s Annual Silver Anvil Awards, one of the industry’s most prestigious award events. More than 1,000 organizations and solo practitioners have been recognized for their work – and this year, that includes three Richmond organizations.

More than 56 million people with disabilities depend on public benefits for income, health care, food and housing assistance. In 2014, the ABLE Act was signed into federal law, providing people with disabilities the opportunity to save money in a tax-advantaged account. In 2016, Virginia529 engaged Padilla to provide community relations support for the nationwide launch of ABLEnow, Virginia’s ABLE program. In its first two weeks, ABLEnow received more than 400 applications (more than any other state program) ranking it among the top three largest national ABLE programs in the country, and making it the country’s fastest-growing ABLE program. 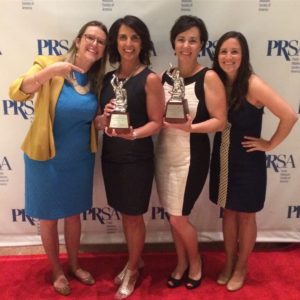 Every penny in Virginia Lottery profits goes to the state’s public schools, but 40 percent of Virginians aren’t aware of that fact. Narrowing that knowledge gap is a longstanding goal for agency leaders, who know that informing residents about the Lottery’s educational virtues mitigates conservative views associated with gambling. Looking for a surge in mindshare, the Virginia Lottery officials turned to Padilla. Together, they launched a “Thank a Teacher” campaign, generating thousands of thank-you notes for deserving educators. That year, the Virginia Lottery recorded the highest awareness level for its education mission in the organization’s history. To read more about the program and the Lottery’s big Anvil win, read the press release announcement.

To see the full list of winners from this year’s event, head over to the PRSA website.