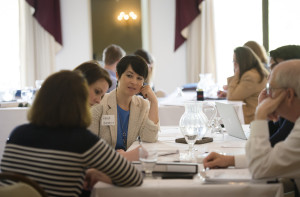 Accreditation in Public Relations is a 50-year old credential awarded to public relations practitioners who demonstrate a command of the principles of strategic communications.

Candidates present a portfolio of their work to a readiness review panel and, if they receive a recommendation to advance, go on to sit for an exam. Typically, the two-step process takes up to one year to complete. APR Boot Camps have become increasingly popular at the national level because they allow candidates to sit for the readiness review panel and the exam over the course of just four days.

“Most chapters in our district do not offer APR training sessions, especially with national-caliber trainers, so there was a real need to be met by the boot camp, said Liz Smith, APR, chair of the PRSA Mid-Atlantic District.

PRSA Richmond has had an active APR committee for many years and has periodically sponsored group study sessions and trainings for members interested in pursuing their APR.

“This was an attractive format for us,” said Rachel Beanland, APR, president of PRSA Richmond. “When the Mid-Atlantic District announced that they were looking for a chapter to host the boot camp, we jumped at the chance.”

On the first day of the boot camp, participants spent the morning preparing for their readiness review and the afternoon sitting for it. The following two days were spent in the classroom, where nationally recognized trainers helped prepare participants for the exam. On the fourth day, participants took the exam.

Greg Surber, APR, who serves as Richmond’s APR committee chair and a liaison to the Mid-Atlantic District, ran the event. He said the biggest challenge was recruiting enough credentialed panelists to run 15 readiness review panels.

The Universal Accreditation Board requires that each panel be staffed by three APRs. The Mid-Atlantic District is comprised of PRSA chapters from Delaware, the District of Columbia, Maryland, Pennsylvania and Virginia, and volunteers came from as far away as Pennsylvania to serve as panelists.

In addition to organizing the event, Surber was also an APR candidate.

“The APR process is, rightfully so, a demanding exercise, testing your understanding of the public relations industry,” Surber said. “For the past several years, I’d considered pursuing it, but always stopped because I couldn’t commit one night a week for several months or attend a far-off training course. Being able to consolidate so much of that preparation into four days was invaluable, and I can honestly say without the Mid-Atlantic District hosting the APR boot camp, it would have been even more years until I finally decided to complete the process.”

The chapter expects to see several more members complete the accreditation process in the months ahead.