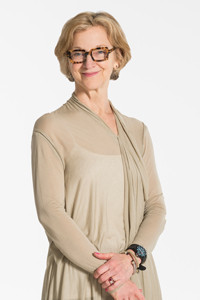 Suzanne Hall, the chief communications officer for the Virginia Museum of Fine Arts, is this year’s winner of the Thomas Jefferson Award for Excellence, which recognizes the achievement of a seasoned public relations practitioner who has made an ongoing commitment to the advancement of the profession.

PRSA: Describe what receiving the Thomas Jefferson Award means to you.

Hall: For the 30+ years I have been involved in three organizations: the Richmond Public Relations Association, the (what was the name of that earlier PRSA group that was more corporate?) and now PRSA, I have enjoyed, worked with and admired my colleagues learning together about our profession as it continually evolves.

It’s a thrill to be the prom queen of PRSA this year, and in this museum that has been my career and my heart for the past 30 years. The Virginia Museum of Fine Arts has been the focus of my energy and the source of countless agenda-setting opportunities for communicating the importance and value of this place to enhance lives, distinguish the Commonwealth and gain insights from timeless works of art. It is, you know, your ART.

In a way, I feel like this award is communal. When is the last time you accomplished something totally by yourself?

We don’t work in a vacuum. As communicators, we are constantly responding and reacting. You can call it mentoring, brainstorming, spit balling, learning, – you can even call it having coffee. You can also call it watching YouTube, listening to NPR and checking Instagram.

The Communications Department is a lean operation at VMFA – just my inspirational colleague and sidekick Pryor Green and me, but we benefit from the engagement and support of over 200 staff and a broad community of peers, including all our colleagues in PRSA.

When you look back on your career, is there a particular highlight or definitive moment that comes to mind? Feel free to share a few.

My longtime friend and beloved Richmond radio host Bill Bevins partnered with me about 32 years ago when Seven Brides for Seven Brothers was playing at the Carpenter Center. I hired an old style mule-drawn buggy and dressed as a bride in a billowing veil, Bill put on a string tie and we rode about in what was then a bustling downtown Richmond, throwing rice with a banner promoting the musical. He and I still laugh at how many people shouted congratulations to us, thinking we were an actual bride and groom in some kind of downtown RVA time warp.

After months of preparation and in close association with Chinese media bureaus in DC, last July VMFA announced a seven-year cultural exchange with the Palace Museum at the Embassy of the People’s Republic of China. The pinnacle moment of that day was witnessing several dozen Chinese media with cameras and lights, surrounding VMFA’s E. Rhodes and Leona B. Carpenter Curator of East Asian Art, Li Jian, as she conducted many interviews in her native Mandarin. Li Jian’s scholarship and pride in her country’s cultural heritage was shared throughout China and served as a platform for deeper understanding and respect between our countries.

I will never forget the 4 a.m. series of live news broadcast by all three local affiliates the day VMFA’s unforgettable Picasso exhibition opened.  Working in those galleries, among hundreds of iconic masterpieces, was both an honor and a privilege.

I’ll never forget standing in the then-newly constructed West Wing with Andy Warhol for a TV interview in 1985 at the opening gala of this wing. He’s was an unusual fellow. And then we dedicated the McGlothlin Wing in 2010, marking a transformative moment in the life of our museum.

We know mentoring is important for you. Who do you consider to be your mentor?  You’ve been a long time mentor for others, too. Tell us about that experience and why you do it.

An ancient quote was reprised by Oscar Hammerstein: “Become a teacher and by your students you will be taught.” Mentoring is a part of my life and has shaped both my career and my life overall.

The VMFA communications department is a heavy user of college interns, to whom we give good experience with real projects (thus leveraging our resources) and from whom we also learn. Not only is this a service to the profession, it invariably results in refreshing perspectives from talented aspiring professionals.

In addition to serving on the American Alliance for Museums board for PR and Marketing, I have been a peer reviewer of museums for the association for the past 15 years. I recently returned from Seattle where I conducted a three day evaluation of the public engagement of a small museum on the Washington coast. The site visit involved conversations and consideration of all aspects of the museum’s staff, volunteers, community and operations that shape its role in the community. A project like this is at best an annual commitment, and includes a detailed report of my findings. These volunteer consulting projects, grounded in best practices for communications and museum operations are enlightening and creative experiences for all parties.

Several years ago I was approached by a young museum professional in Washington, DC who asked me to be her mentor. I responded that I would enter into the six-month undertaking if we could find a way to benefit a broader audience. We developed a curriculum, a blog, Talking About Talking, and conducted monthly discussions on Google hangouts and promoted these nationally to museum communications professional so others could join in. This became a somewhat of a touchstone for innovation by the American Alliance for Museums.

For much more than 20 years I have been involved in missions with my church, St. James’s Episcopal Church. Whether it is providing a summer camp for children in Richmond’s Creighton Court, mere miles from this place to administering meningitis vaccines to the children of Southern Sudan, it is clear to me that we have what is often an embarrassment of riches. But to those to whom much is given, much is expected.

I have recently announced my intention to retire at the end of the month. My wonderful and ever-patient and supportive husband Joe and I will embark on some epic adventures and when we return to RVA, I will begin a post-retirement dream job at St. James’s Church as Director of Stewardship, a new career for me full of growth opportunities, as well as opportunities to contribute to my faith community.

Of course the big news to you is that will be a very sweet job opening at VMFA in the near future!