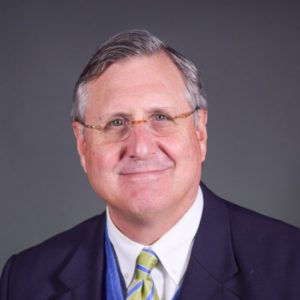 Josh Dare, co-founder of The Hodges Partnership, is this year’s winner of the Thomas Jefferson Award for Excellence, which recognizes the achievement of a seasoned public relations practitioner who has made an ongoing commitment to the advancement of the profession.

Dare’s career in communications spans more than three decades. He spent the early part of his career in the federal government, working in the press office at the FBI and the National Endowment for the Arts as well as on Capitol Hill as a press secretary. His move to the private sector included positions at Sallie Mae, Circuit City and The Martin Agency and two high-tech startups. A Leadership Metro Richmond graduate, Dare is actively involved in the community, having served on the board of Greater Richmond SCAN (Stop Child Abuse Now) for 10 years, the William Byrd Community House and Impact Makers. He currently serves on the boards of the Community Idea Stations and the Virginia Capital Trail Foundation and is president of the Central Virginia Lambda Chi Alpha Alumni Association.  Dare received his degree in English from Gettysburg College.

Describe what receiving the Thomas Jefferson Award means to you.

It means a great deal, especially when I think about the incredible talent within Richmond’s public relations community. I look at the past recipients of the TJ, and I can’t help but feel humbled at being included in such company. I’ve been in this profession for 38 years, and this is truly a dizzying highlight.

When you look back on your career, is there a particular highlight or definitive moment that comes to mind? Feel free to share a few.

When I was 25 years old, I wrote a memo to my boss in the public affairs office of the FBI, noting that the next year would be the Bureau’s 75th anniversary and suggesting some ways to commemorate it. One thing led to another, and I found myself in charge of a special staff and committee charged with the commemoration. It was a heady assignment for someone so young, and I got to spend the weekend with Jimmy Stewart and his wife (he starred in an old movie called “The FBI Story” and came to Washington as part of the celebration). My years as a press secretary on Capitol Hill and as a spokesman for the National Endowment for the Arts during the so-called “culture wars” also helped define my approach to the profession. On the other hand, I recall the day at Sallie Mae when I got called into an office, thinking I was going to be put in charge of the communications division (since my boss and his boss had been laid off earlier that day) only to find out that I was among those being laid off as well. That was a fun phone call to my wife. And of course, I can’t leave out the day that Jon and I decided to leave The Martin Agency to start Hodges. Once we convinced our wives we weren’t crazy, we were off and running.

We’re sure a number of people look up to you as a mentor. Who do you consider to be your mentor, and why?

That’s a tough one.  I had a boss at the FBI who let me know early in my professional life that I was in charge of my own career. And one of my seven bosses in seven years at the NEA contributed a lot toward my professional growth. But I think mostly that I learned the most from the people I worked side by side with. I’ve been fortunate to have worked with so many smart and talented people over the years, and that includes the past 15 years at Hodges. I’ve learned as much from Jon and from the young people we’ve surrounded ourselves with as from any person my senior. And I think that I am still a work in progress, with lots more to learn.

In your mind, what are the benefits of PRSA Richmond to the Richmond PR community?

There are the obvious benefits of course – the thought leadership that the association provides, keeping local PR professionals abreast of the latest trends and best practices within the profession. Those are all very important roles, of course. But beyond that, I think that PRSA really is the connective tissue for the PR community in Richmond. We should have a support system for one another, and I think PRSA serves that role. While we are all responsible for our own professional development, PRSA is the vehicle that helps local PR professionals reach higher and do more than would otherwise be possible. I think the Richmond chapter of PRSA really excels in that regard.

Mostly, I just want to extend my appreciation to PRSA and my many friends and colleagues for their support and well wishes.  I’ve always been proud to call myself a “public relations professional” and have come to know some truly great people by virtue of our mutual profession.  My thanks go out to all of them.