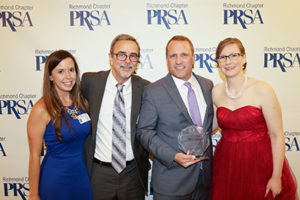 The Richmond Chapter of the Public Relations Society of America (PRSA) honored statewide organizations and companies for excellence in public relations at the 2017 Virginia Public Relations Awards ceremony on Wednesday, May 10, at The Jefferson Hotel.

“The caliber of work that we see at the Virginia Public Relations Awards is outstanding, and a testament to the tremendous PR community we have here in Virginia,” said Jennifer Guild, APR, president of PRSA Richmond. “As an organization, we’re thrilled we had the opportunity to recognize this success for the 70th year in a row.”

The Virginia Public Relations Awards are separated into two divisions: the Commonwealth Awards honor the best public relations programs and campaigns of the year and the Capital Awards honor the best public relations tactics of the year. Best in Show awards are given to the top overall entries in the campaigns and tactics divisions.

With a two-way tie for Capital Awards Best in Show this year, there were three total Best in Show awards given at the event, all of which went to Padilla. The agency received two Capital Awards for their work with Bridgestone Retail Operations and the Children’s Hospital of Richmond at Virginia Commonwealth University and a Commonwealth Award for their work with Virginia Lottery.

Josh Dare, co-founder of The Hodges Partnership was honored with this year’s Thomas Jefferson Award for Excellence in Public Relations. Dare founded the local public relations agency in 2002 with his business partner Jon Newman. The Thomas Jefferson Award, which recognizes a public relations professional at the height of his or her career, is open to PR practitioners in the Greater Richmond metropolitan area. PRSA Richmond donates $1,000 to the charity of the recipient’s choice. Dare will be making the donation to the Richmond Public Relations Foundation, the charitable arm of PRSA Richmond that provides scholarships on an annual basis to local students studying public relations.

PRSA Richmond also honored Blake Mirzayan with the Rising Star Award, which recognizes an exemplary Richmond professional who has five or fewer years of experience in the public relations profession. Mirzayan is an account executive for Padilla.